Boston’s Brad Delp Suicide In 2007 Was “Death By Barbecue.” 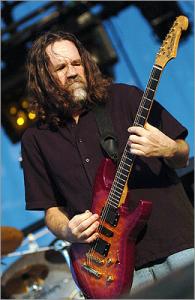 Brad Delp was a founder member of the hugely successful American band Boston who released their eponymous first album, “Boston,” in 1976.
Even people who have never heard that album, and I guess there will be a few of those despite the fact that over 19 million copies of it were sold, will probably have heard the song that made Boston a household name not just in the USA but all over the world, “More Than A Feeling”.
Along with his bandmates, multi-instrumentalist, engineer and producer Tom Scholz who founded the band, guitarist Barry Goudreau and the band’s original drummer Jim Masdea, Brad recorded several songs that were initially rejected by the record companies to which they were submitted.
Eventually a deal was struck with Epic Records and Masdeau left, apparently at the insistence of Epic, to be replaced by Sib Hashian.
With the lineup now stabilised, at least for a while, the band finished work on what became the fastest selling debut album in USA history, “Boston”, which finally hit the shelves in August 1976. Three further platinum, (1 million plus sales) albums followed, the first being “Don’t Look Back” in 1978 and then after a long gap, “Third Stage” in 1986. Their fans had to wait another 8 years before “Walk On” which came out in 1994 and also, albeit only just, turned platinum.
Brad Delp’s characteristic vocal style and wide vocal range complemented Tom Scholz’s instrumental and writing styles perfectly and the results were, by any standard, truly impressive. The band continued to enjoy critical and commercial success for many years although not quite at the heady levels that they experienced with their phenomenal debut work. A version of Boston, with Tom Scholz now the only original member, persists to this day and is still touring.
Brad had signalled his desire to do other things during the gestation period for “Walk On and had indicated to Tom in 1990 that he might not be fully available anymore. He did contribute to “Walk On” however, (in fact he co-wrote that particular song after which the album was named) but was eventually replaced as vocalist by Fran Cosmo.
Since then, Brad did in fact work with Scholtz on a number of occasions and toured with Boston several times.
He also had a number of different project on the go including RTZ with Barry Goudreau and Beatlejuice, a tribute to the Beatles who Brad had always cited as one of his most significant influences.
On March 9th 2007 Brad Delp was found dead on the floor of his bathroom at his home in New Hampshire. He had died as a result of Carbon monoxide poisoning which had been caused by fumes from two lit barbecues that had been placed in the room and after which the room had been sealed to prevent the fumes from escaping.
Brad had left four suicide notes privately addressed to family members and had pinned a further note to his shirt for public consumption. The note read simply “Mr. Brad Delp. “J’ai une ame solitaire”. I am a lonely soul.”

Brad Delp Boston Founder Member – Well Liked Both On And Off The Stage.

You will find it extremely difficult to find anyone who spoke ill of Brad Delp. He was widely described as a nice thoughtful and generous person. The true reason for his suicide has never been established or, if it has, it has never been made public. It seems that he didn’t want those details to become public knowledge and we have to respect that and the wishes of his family and close friends.
He has left us a great deal of significance to remember him by, I never knew him personally of course but, like the millions of other Boston fans all over the world, my enduring memory of him will be those wonderful songs on which he performed and sang. The world would have been less wonderful without Boston and without Brad, Boston would never have been the same.