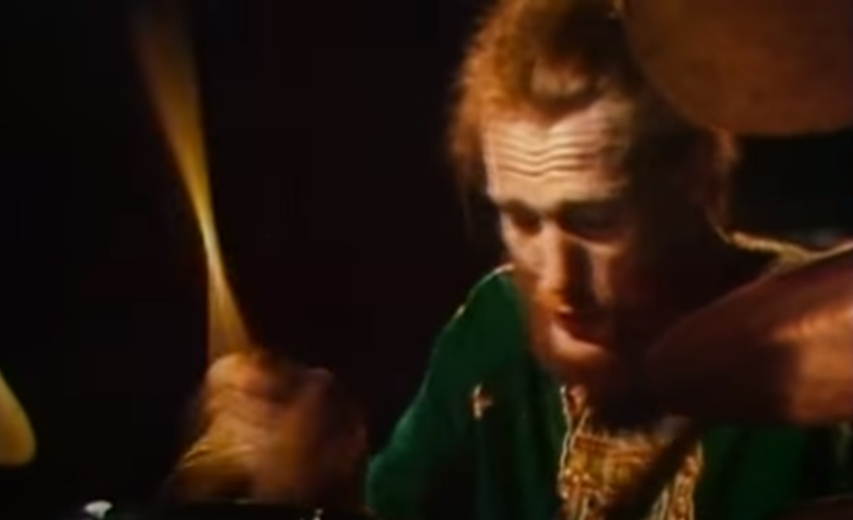 Ginger Baker Made Me Skip School!

I didn’t skip school very often but there was one reason for doing so that I simply could not resist – my mate had an older brother who had a fantastic collection of LPs and one of those albums was Cream’s “Wheels of Fire” which was a double album. One of the discs comprised of studio recordings but the other was a live album and it had some really memorable tracks including “Crossroads” which I consider to be one of the best live recordings of a rock band ever made, and “Toad” which is mainly a showcase for Ginger Baker.

Before the arrival of Ginger Baker, the drummer used to be the quiet one sitting at the back of the stage whose job was to keep time. Baker, who has died aged 80, pioneered the image of the rock drummer as a flamboyant virtuoso, engaged in a dynamic interaction with the musicians around him.

According to Neil Peart, the drummer from the Canadian band Rush: “Every rock drummer since has been influenced in some way by Ginger, even if they don’t know it.”

Baker found fame with Cream, the 1960s rock trio also featuring Eric Clapton and Jack Bruce, whose two-year career inspired a new wave of blues-based rock bands. Cream is now seen as the first “supergroup”, comprising outstanding musicians each of whom was blazing a trail on his respective instrument. Baker brought a freewheeling energy to his drumming, prompting comparisons to the jazz drummer Art Blakey. He was not abnormally fast or flashy, but he was innovative, using twin bass drums and displaying a flair for African-influenced beats, to which he had been introduced by the British jazz drummer Phil Seamen.

The idea of using the drumkit as a solo instrument was an innovation ascribed to Cream, though one that listeners would find a mixed blessing in years to come. The band was undeniably adept, however, at creating unusual but commercially potent singles. Hits such as I Feel Free (1966), White Room (1968), Sunshine of Your Love (1968), Tales of Brave Ulysses (1967) and Badge (1969) are some of the most atmospheric, rhythmic and distinctive compositions of their era.

In 1962 Baker, then a jobbing drummer in London’s jazz clubs, had been recommended by Charlie Watts, the future Rolling Stones drummer, for a job with Alexis Korner’s Blues Incorporated, where he first encountered Bruce. Along with Graham Bond and the saxophonist Dick Heckstall-Smith, the pair formed the Graham Bond Organisation, playing a form of jazzy rhythm and blues that won them a devoted following. However, they also developed a hostility that eventually led to Baker firing Bruce from the band.

Baker then approached Clapton, the rising star of British blues, with a view to forming a new group. Clapton was enthusiastic, but insisted on bringing in Bruce on bass. Despite misgivings, Baker agreed. Cream’s debut single, Wrapping Paper (1966), was uncharacteristic light jazzy pop, but their debut album, Fresh Cream, released that December, found the group already hitting its distinctive stride in powerful tracks such as NSU, I’m So Glad and Spoonful. It reached No 6 on the UK album chart.

The band released two further albums during its lifetime. Disraeli Gears (1967) was a formidable demonstration of their instrumental and compositional skills, while the live half of Wheels of Fire – a US chart-topper – illustrated the self-indulgence they were capable of in concert. The group split up in November 1968, at least partly because of the violent antagonism between Baker and Bruce, and a fourth album, Goodbye, appeared in February 1969. Despite being a short and scrappy collection of live and studio tracks, it gave them a UK No 1, and their four albums sold 15m copies between them.

Following Cream’s demise, Baker joined a new “supergroup”, Blind Faith, with Clapton, Steve Winwood (from Traffic) and bassist Ric Grech (from Family). Despite the huge success of Blind Faith’s eponymous 1969 album, which topped both the US and British charts and sold half a million copies within a month of release, the band disintegrated that October, after completing a US tour. Baker was bitterly disappointed to find that Clapton was jumping ship (he departed to form Derek and the Dominoes) and decided he would form a band of his own.

Winwood and Grech stayed long enough to appear on the group’s first album, a double LP live recording of a concert at the Royal Albert Hall in January 1970, before departing to join a reunited Traffic. Without Winwood or Clapton, however, Baker could not pull the crowds.

When the now nine-piece Air Force embarked on a US tour, it was met by miserable ticket sales and a lack of interest at radio stations. A second album, Ginger Baker’s Air Force 2, was released in December 1970, but it failed to recapture the spontaneous magic of its predecessor, and both album and band slid into obscurity.

After a near-fatal cocaine overdose that September, Baker realised he needed a complete break and, travelling by Land Rover, went to Lagos, Nigeria, where he opened a 16-track recording studio, Batakota (ARC) studios, and became close friends with local – later global – superstar Fela Kuti. Baker fully immersed himself in the rhythms of African music, and also joined the Lagos Polo Club. He retained his enthusiasm for horses and polo for the rest of his life.

During his spell in Lagos, Baker featured on Kuti’s 1971 album Live!, while Kuti appeared on Baker’s Stratavarious (1972). In 1973 Paul McCartney and Wings recorded Picasso’s Last Words (Drink to Me), from Band on the Run, at ARC, on which Baker shook a tin of gravel as percussion, though he was disgruntled that McCartney recorded the rest of his album at EMI’s Lagos studios.

Finding himself penniless and reduced to selling drugs, Baker left his wife, Liz (nee Finch), whom he had married in 1959, and their three children, and headed for Tuscany with his girlfriend, Sarah, to try to survive as an olive farmer (the pair married in 1983, but divorced the following year).

He was rescued by the record producer Bill Laswell, who tracked Baker down and took him to New York to play on Album (1986), the fifth studio album by John Lydon’s Public Image Ltd (PiL). “The farm was a disaster,” Laswell commented of Baker’s Tuscan retreat. “There was no electricity, and he had this tiny bed he would sleep in with his dogs. It’s a miracle that he was still alive.”

Born in Lewisham, south-east London, Peter Baker – his red hair earned him the unoriginal nickname of “Ginger” – was the son of Ruby Streatfield, who worked in a tobacconist’s, and Frederick Baker, a brick-layer who was killed while serving with the Royal Corps of Signals in 1943. The young Ginger was aimless and unmotivated until he discovered a passion for competitive cycling.

This ended abruptly after his bike was wrecked in a collision with a London taxi. Then he experimented with playing drums belonging to a friend from Shooter’s Hill grammar school, which inspired him to buy his own set for £3. “I thought, good God, at last there’s something I can do,” he recalled.

Cream performing Sunshine of Your Love
He began playing music part-time while working as a signwriter and then with an advertising agency, but after earning £12 for a week’s work with the Storyville Jazz Band he decided to turn professional. By the end of the decade he had played with Terry Lightfoot’s New Orleans Jazzmen and bands run by the jazz clarinettist Acker Bilk and the jazz guitarist Diz Disley. However, the opinionated, combative Baker found himself frustrated by both his bandmates and the music’s stylistic limitations. An unfortunate side-effect of his stints in London jazz clubs was a heroin habit that would dog him into the 80s.

Baker weaned himself off the drug in that decade and, following, his work with PiL, continued to collaborate with Laswell, with his own album Horses & Trees (1986), an eclectic set featuring the violinist L Shankar and percussionist Aïyb Dieng, and Middle Passage (1990), a mix of Afrobeat, rock and jazz-fusion.

In 1988 Baker had moved to Los Angeles, where he met and married his third wife, Karen Loucks. In 1993 he moved to a ranch in Colorado to raise polo ponies. Also that year he recorded Sunrise on the Sufferbus with the hard rock band Masters of Reality, an album that produced the hit single She Got Me (When She Got Her Dress On).

He managed to fit in stints with the Ginger Baker Trio, with the guitarist Bill Frisell and the bassist Charlie Haden, and even briefly reunited with Bruce alongside the guitarist Gary Moore in BBM. However, in the late 90s, problems with the tax and immigration authorities forced him to leave the US for good.

He bought a farm in KwaZulu-Natal in South Africa, but upset the local all-white polo club by importing a team of black Nigerian players. Again forced to move, he resettled in Tulbagh in the Western Cape. In 2010, he was married for the fourth time, to a Zimbabwean woman, Kudzai Machokoto.

In 2005, Cream reunited for a series of concerts at the Royal Albert Hall and New York’s Madison Square Garden, preserved on the album Royal Albert Hall London May 2-3-5-6 2005. In 2009 Baker published Hellraiser: The Autobiography of the World’s Greatest Drummer, co-written with his daughter Nettie. Jay Bulger’s documentary Beware of Mr Baker premiered at the SXSW festival in 2012, and its raw portrayal of Baker’s extraordinary life won it the grand jury award for best documentary feature. The same year, an impoverished Baker had to sell up and leave South Africa. He returned to London and formed a new quartet, Jazz Confusion, which in 2014 released Why?

Baker, who had been suffering from degenerative osteoarthritis and a smoking-related pulmonary condition, is survived by Kudzai, his children, Nettie, Leda and Kofi, and a stepdaughter, Lisa.