George Harrison – All Things Must Pass 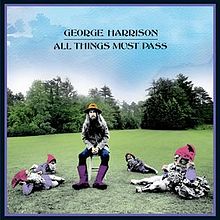 When a former member of the Beatles releases an album, just after they had disbanded, people were bound to take notice. All Things Must Pass was released in 1970 and became both a commercial and a critical success. It attracted attention in many ways, apart from the reputation of its creator – it was release as a triple album, something not often seen, and it featured contributions from artists of a very high calibre including none other than Eric Clapton.

Add to this, a producer who rewrote the rule book on studio production, Phil Spector, along with George Harrisons writing and playing skills and you have the recipe for success. However, this album was much more than just a commercial success – it featured several songs that are masterpieces in their own right, e.g. My Sweet Lord and What Is Life – everything was put together in such a way as to make the entire album an immersive and very satisfying listening experience. Apart from the better-known tracks there are other gems that add to the magic including Wah Wah and Apple Scruffs. Although George Harrison wrote most of the songs there are a couple of Dylan covers to enjoy.