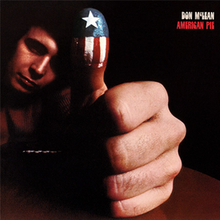 Don McLean had worldwide success with this epic song about the tragic death of Buddy Holly and the sense of loss that he and millions of others felt when the news broke – a feeling that continued to be felt for many decades. This song has also remained in the hearts of people for at least two generations and provided McLean with a well-deserved lifetime income. As he himself once said when asked about the meaning of the song – “It means that I don’t have to work if I don’t want to.” Don McLean, however, did not take the easy option and live off the proceeds of just one, brilliant, song, instead he penned and performed many more memorable numbers including Vincent, And I Love You So, and many more.

So why do I consider American Pie to be his masterpiece?