Eel Pie Island is a small island in the Thames, approximately 8 acres in size, and is the home to many artists, scuptors and the like.

There are also a number of private houses on the island and a few businesses are based there.

Not that interesting really, or is it?

The answer is a resounding YES. Why?

Because in the 1960’s Eel Pie Island was a well known and important venue for jazz, Blues and, later, Rock & Roll music concerts. Many music loving people would make the crossing over the small foot bridge to the island. Although not as famous worlwide as the Cavern Club in Liverpool where the Beatles carved out their career the Eel Pie Island Hotel was just as important to the growth of rock & Roll in the UK during the 1960’s. The venue was also close by the Crawdaddy club where many of the same acts would perform.

The venue – The Eel Pie Island Hotel, now gone, (sadly burned down in 1971 in what are described as “suspicious circumstances”). Apparently the building was run-down and needed extensive repairs in order to make it safe.

Artists who have appeared at the eel Pie Hotel include George Melly, Screaming Lord Sutch, The Who, Rod Stewart, Small Faces, Pink Floyd, David Bowie and many more – see list below. The Rolling Stones once had a short residency there. Among many other residents of note was Trevor Baylis, inventor of the wind-up radio who lived there until his death in 2018 aged 80. The original Dr Who, William Hartnell, lived there in the 1960’s.

In 1977, Pete townsend of The Who founded a publishing house called Eel Pie Publishing which was named after Eel Pie Island. The company was wound up in 2014 and no longer trades. However, another, associated, company, EEL PIE RECORDING PRODUCTIONS LIMITED, was founded by Pete townsend in 2011 and is still trading, with Townsend as a director.

There is a very good book by Michele Whitby and Zoe Howe, all about Eel Pie Island entitled “The British Beat Explosion: Rock n’Roll Island” 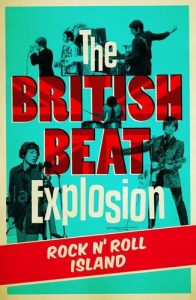 In 2015 a 30 minute documentary called  ‘Rock ‘n’ Roll Island’ and featuring interviews with notable musicians, fans and club-goers of the Eel Pie Island Hotel Club was premiered at the Raindance Film festival at the Vue Cinema in Piccadilly Circus.

There’s an interesting article about Eel Pie Island in the Guardian – here’s the link: https://www.theguardian.com/music/2016/jul/09/eel-pie-island-british-r-and-b-bowie-stones-museum