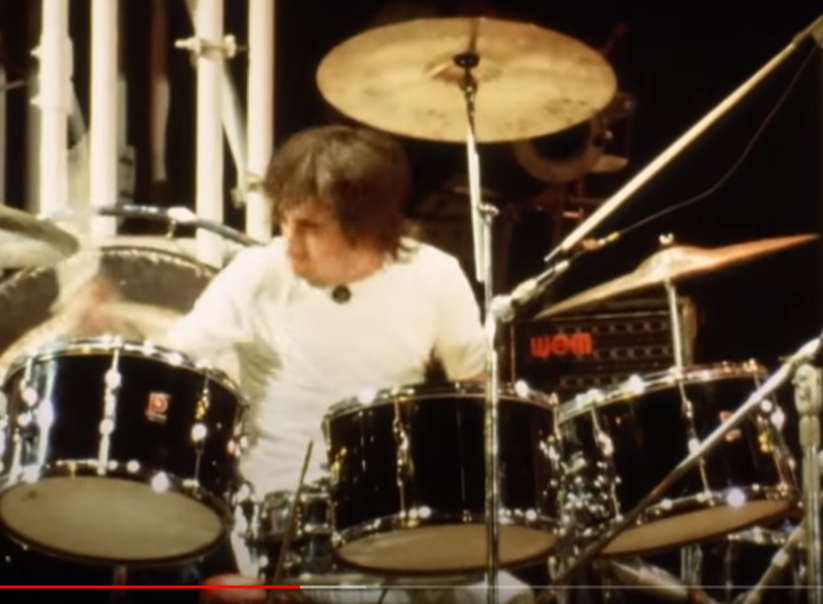 Born and raised in post war London, Keith Moon came from humble beginnings and carved out a career that defined the way in which rock stars were expected to live – even if most of them actually didn’t.

Keith Moon, The Who’s celebrated drummer, was born in Wembley on 23 August 1946, and is widely acclaimed as the greatest drummer in the history of rock. Brashly confident, he played quite differently to his peers, turning his massive kit into a lead instrument, and his up-front technique was crucial in establishing The Who’s passionate style. His playing ushered in an era wherein the drums became far more than simply a means of keeping the beat, and much of his recorded legacy from 1965-73 has a timeless quality that has never been repeated, let alone bettered. In this respect Keith Moon was to the drums what Jimi Hendrix was to the guitar – a complete original – and as such he was probably the most influential drummer the rock world has ever seen.

There was nothing in Keith’s humble background to suggest the extraordinary turn of events his life would take. He became a surf music fan as a schoolboy, took early lessons on drums as a teenager and played with three local bands in his native Wembley in north west London, the Escorts, Mark Twain & The Strangers, and The Beachcombers, before joining The Who in the spring of 1964 after an impromptu audition at the Oldfield pub in Greenford. Shortly after Keith’s recruitment, the Who became managed by Kit Lambert and Chris Stamp whose energy and ambition focused the group and set them on the road to stardom.

Moon announced his arrival in spectacular fashion on The Who’s first real single ‘I Can’t Explain’ (1965) on which his rifle-shot snare pre-empted Roger Daltrey’s leap into the chorus. Mostly, though, his foil was Pete Townshend with whom he developed an uncanny musical relationship, the product of which became one of the Who’s great trademarks: the chiming, bell-like, open-stringed power chord, cross cut against pounding drums and bass and allowed to feedback on itself and drone into a wall of electronic discord.

Moon’s drumming is outstanding throughout the group’s début album My Generation and on several Sixties singles, most notably ‘Happy Jack’ (1966) and ‘I Can See For Miles’ (1967), but it is on the double album Tommy (1969) that his talents are best utilised. On Townshend’s celebrated rock opera he becomes an orchestra within himself, driving the band along with an intelligence and sureness of touch that defies analysis. On Who’s Next (1971) Moon is reined in somewhat but his playing on the bridge on ‘Behind Blue Eyes’ and throughout both ‘Bargain’ and ‘Won’t Get Fooled Again’ ranks with anything he ever did.

The Who’s greatest strength, though, was in concert and by the end of the Sixties they were justifiably billing themselves as ‘‘the most exciting rock band in the world’’. To this Moon contributed an almost superhuman energy, his hands and feet battering his kit into submission night after night, the relentless power of The Who in full flight spiralling out from his arms and legs.

Moon’s kit was the biggest in rock, at one stage boasting at least 10 tom-toms, twin bass drums, twin timpani, snare, half-a-dozen cymbals and a gong. With this vast array of percussion at his command, he adopted a peculiar style wherein he pointed his sticks downwards and, as John Enwtistle once remarked: “He didn’t play from left to right or right to left, he’d play forwards. I’ve never seen anyone play like that before or since.” Keith was also a virtuoso showman, twiddling his drumsticks between his fingers and flamboyantly tossing them into the air and, occasionally, catching them when they fell. He developed an on-stage image as a wise-cracker and often ad-libbed comical asides between numbers, and like Pete he took an almost manic delight in wrecking his equipment at the close of a concert, especially in the group’s early days.

At the same time Keith was rock’s wildest character in the Sixties and Seventies, an unapologetic freewheeling hedonist whose lifestyle became synonymous with the mad, carefree image of the rock star at large. He courted the press and became notorious as ‘Moon The Loon’, the incorrigible clown who respected no authority whatsoever and never knew the meaning of the word embarrassment. As The Who became massively popular worldwide, so Keith Moon became a celebrity, not just as a drummer, but as the mad jester to rock’s high court whose exploits included cross-dressing, elaborate practical jokes and a much-publicised episode when he and his great friend Vivian Stanshall of the Bonzo Dog Band visited a London beerkeller dressed in Nazi SS uniforms. Keith’s Chertsey home, Tara House, became the venue for many memorable parties, not least the 1971 launch of Who’s Next.

When The Who slowed down and Pete Townshend sought creative outlets elsewhere Keith moved to California and took cameo roles in several movies, most notably in That’ll Be The Day (1973) and its sequel Stardust (1974), as the drummer in a fictitious rock band led by David Essex. He also completed a solo album, Two Sides Of The Moon (1975) before moving back to the UK in 1977 to play on Who Are You, his last recorded work with The Who.

Keith died in London on 7 September 1978, from an accidental overdose of the prescription drug Heminevrin, prescribed to combat alcoholism.

In 2016 Keith’s life was celebrated in the book There Is No Substitute, A Tribute To Keith Moon, in which fellow drummers, musical allies, friends and fans assessed Keith’s impact on rock and its lasting legacy. The book, with an introduction by Pete Townshend, was authorised by his Estate.